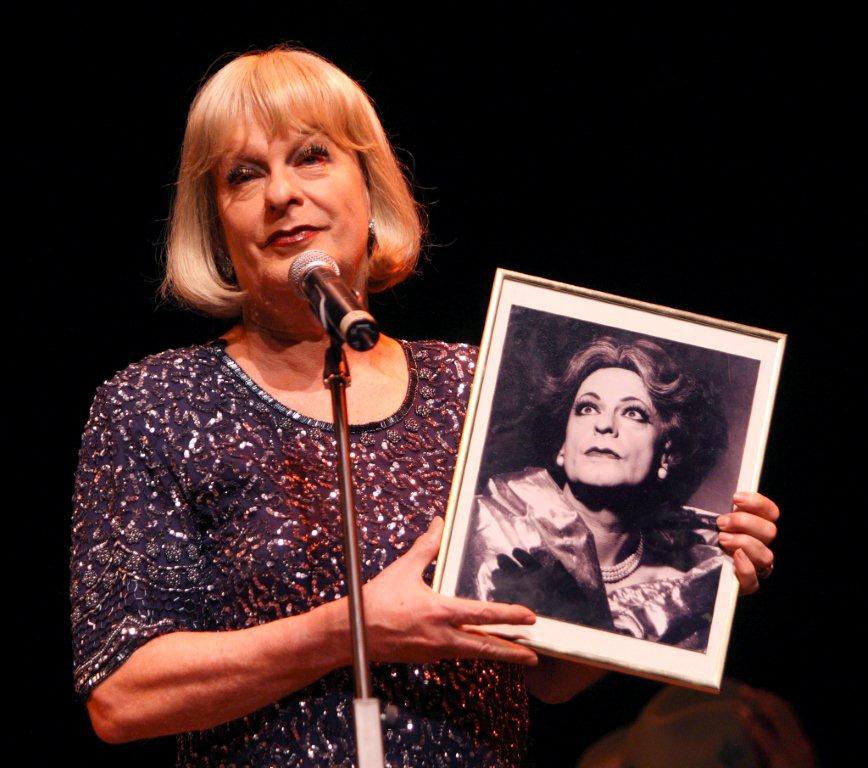 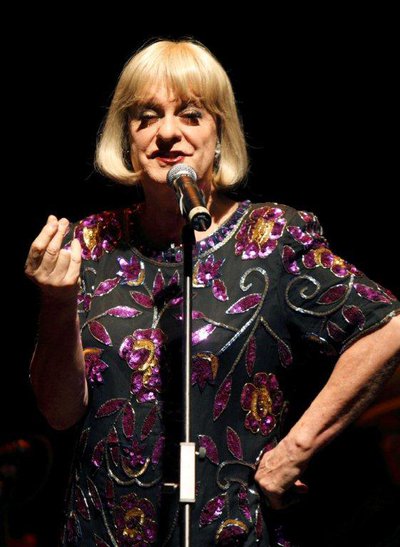 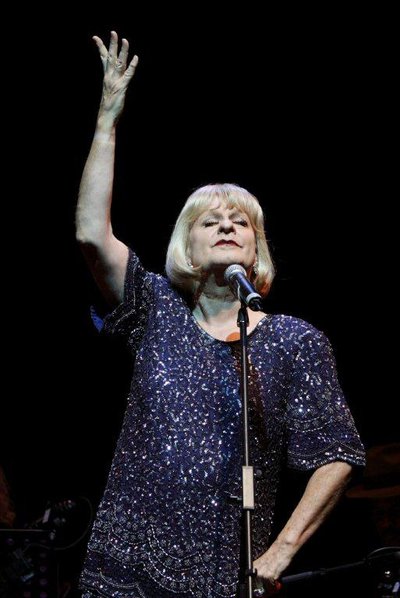 With Pieter-Dirk Uys as 'Madame Bambi Kellermann' and Godfrey Johnson at the piano.
"BAMBI IN KABARET"
"Bambi is a gift from Pieter-Dirk Uys we should treasure while we have her with us." CAPE TIMES
"Dit is alles en nog meer as wat 'n kabaret behoort te bied." DIE BURGER
"Bambi still has teeth and she's cracking nuts!" SUNDAY TIMES
There seems to be no end to the appeal of Tannie Evita's blonde sussie! After her controversial appearances at recent festivals and her legendary
theatrical soirees which won her the Best Cabaret / Fleur du Cap award in 2010, Bambi Kellermann will now perform where she belongs: in Fox Street Johannesburg. The PopArt Theatre will host a three-performance season of the cabaret which critics have hailed as a milestone in musical satire and 'not to be missed!'
Bambi Kellermann (born Baby Poggenpoel) is the younger sister of Mrs Evita Bezuidenhout, the 'most famous white woman in South Africa'. Chalk and cheese. Whereas Evita has become a household name and favourite across political-party lines, Bambi smoulders in the background - not yet as famous as her sister, but far more dangerous. She left Bethlehem in South Africa's Orange Free State in 1956 and went to Europe where she eventually married Joachim von Kellermann, a notorious nazi survivor of the Second World War.
In order to hide him from arrest, she took whatever job she could, in many cases verging on the pornographic. Eventually they reached Paraguay where von Kellermann found old SS friends. He became Minister of War. He has since died.
Bambi is back in the democratic South Africa. She runs a wine-tasting cellar in Paarl, sometimes referred to as nothing more than an excuse for a
high-class brothel. It is known that she is HIV-positive. But with money and knowledge, she can live with her virus, as she did with her terrible
secrets. She sings - well, she has been inspired to sing by many who also could not sing, but became famous for their singing: Marlene Dietrich,
Hildgarde Knef and Zarah Leander to name the German ones. She loves the music of Kurt Weill and Stephen Sondheim. And being an Afrikaner meisie at heart, finds any excuse to sing her favourite Boere Liedjies out of the FAK Sangbundel. But with a sinister twist.
This is what the Kabaret is about: her extraordinary story of survival told in song, her background echoed in familiar tunes, her inspirations gently
mocked through canny impersonation. With Pieter-Dirk Uys as Bambi and with music arranged and played by Godfrey Johnson, the cabaret is performed in three languages. Bambi's story is told in English, while the songs also include some in German and some in Afrikaans. This cabaret is not for the faint-hearted. It unites the acrid stench of the old Weimar Republic of the 1930s and the sexy rot of Hamburg's Reperbahn with the familiar aromas associated with  'ons eie' Voortrekker-camps and braaivleis-orgies.
"Uys dons eyelashes, and presidents listen." - Los Angeles Times

The shitty piano(budget constraints I'm sure) made Pieter inaudible at times, however it was a fantastic show overall.

The show was even more brilliant than I hoped for. We are blessed to be able to share such talent!

Loved it and will definately make a point of coming to more events at the theatre. Very intimate venue and makes me feel more at home during the show.

It was an excellent show. People who missed the show can really be sorry. Well done to POPArt Theatre for hosting such a show. Warm regards Aniki

Really enjoyed the show and the evening, such a lovely venue.

Excellent Show! I thoroughly enjoyed it - sterling performance from Pieter Dirk Uys as per usual. Worth watching and would happily sit through it again!

Such a wonderful mix of humour and politics. A very important show!